I know, the post have been severely lacking the past few months.  The new addition to our family is set to arrive in about a month so we have been pretty preoccupied getting the house ready for him.  With that being said we are also trying to prepare our Toshi dog for the changes that will be directly impact him.  Toshi is pretty much our child right now. We spend everyday, all day together.  This means that he rides in the car each day on his way to and from work.  Toshi does not have the best car habits and I'm sure its my fault, since I did not correct him when he was younger but if you remember that cute picture from when we first took him home I'm sure you would have had a hard time as well.  Anyway, Toshi insist on sitting on the arm rest right next to my face.  I have tried to put him in the back seat, I have tried the front seat, I have tried pushing him off or putting a barrier from the front to the back however nothing seems to work.  He is pretty persistent and I do not like to keep pushing him while I'm trying to drive.  Since we are going to have a baby in the car very shortly we realized this is not the way we want to drive around.  Enter the doggie seat belt.  I've had it for about a week now and so far its not too bad.  Toshi is not a fan and he can still get up open the arm rest, however if I push him to the front seat he seems to just stay there and I do not have to worry about him when I have to use the  breaks or make tight turns, this is a huge deal.  Once the baby gets here I do plan on placing him in the back seat with his seat belt, which will ultimately keep him from getting up front and make the car safe for everyone.

Toshi recently spent a fun week at his grandmas house while mom and dad went on vacation.  He was not forgotten while we were gone.  Once we got home Toshi received his Hawaiian pineapple gift.  I think he was a big fan and it made up for leaving him behind for a week.  Believe it or not it is still in one piece after one night, although it does have a small hole so I don't see it lasting much longer....We missed you Toshi dog! 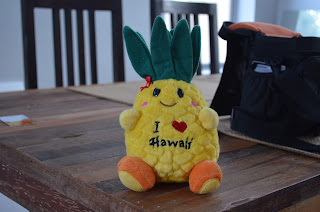 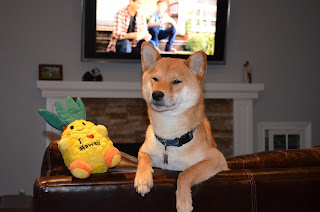 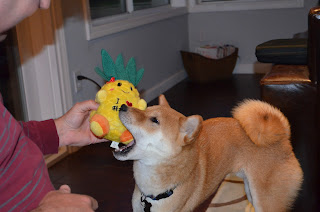 This afternoon we decided to take Toshi to the local dog park.  He was a little apprehensive at first but eventually he made some friends and had some fun. 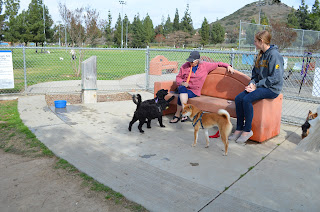 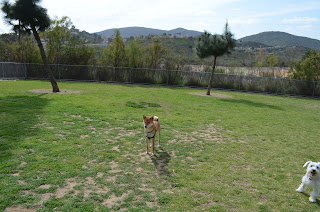 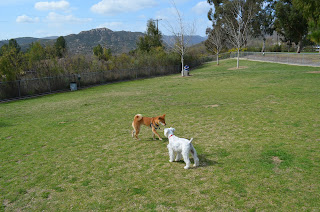 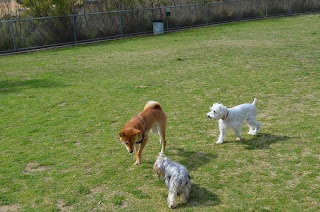 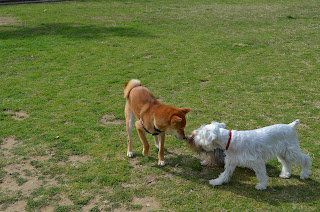 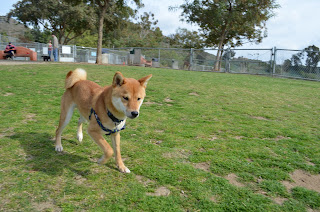 It looks like this is a place we can come back to again really soon.
Posted by Toshi Dog at 8:27 PM No comments:

This years Valentine's Day was another first for Toshi dog.  We celebrated the day with a special treat. 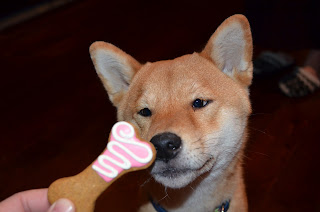 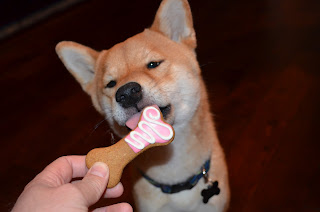 Happy Valentines Day Toshi!  Our lives would be pretty boring without your cute little face around every day.
Posted by Toshi Dog at 8:06 PM No comments:

During football season we are pretty much a divided house.  Dan is a San Diego native, which of course makes him a Charger fan.  I grew up in New England and have always been a big Patriot fan.  Toshi dog tends to stay neutral on his football team choice, unless one of the teams is in the Super Bowl like this past Sunday.  Here is a picture of Toshi showing his support for his moms team.  Unfortunately the Patriots were not able to pull off the win against the other team who shall remain nameless :(  However, Toshi had tons of fun socializing with all of our Super Bowl party guests.  There's always next year..... 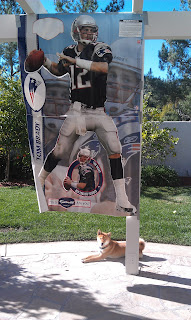 Toshi and the Baby 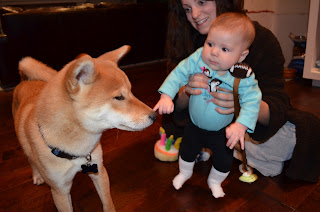 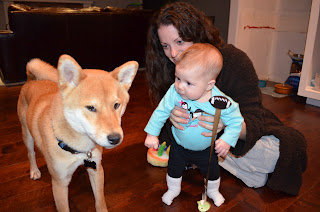 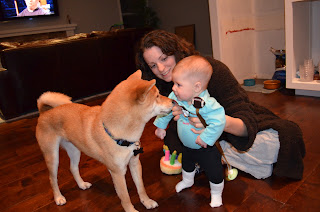 Happy Birthday to Me

We were lucky enough to get Toshi  on video "singing" along with his happy birthday toy.  If you listen closely you can hear him "singing" in the background.  This pretty much went on all night.  This is one toy that is not allowed upstairs with us at bedtime.